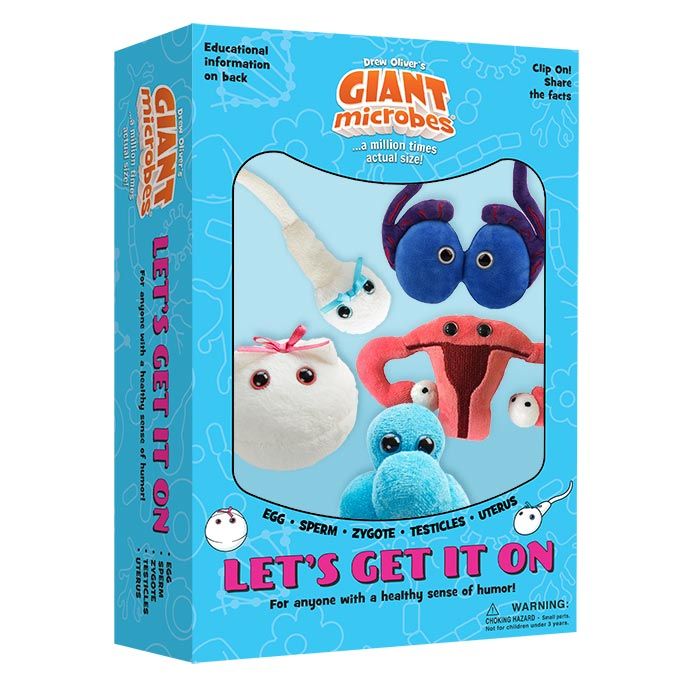 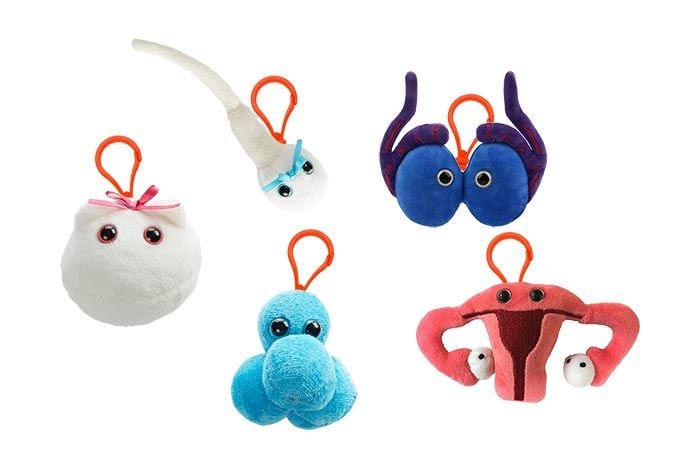 Let's Get It On

New! Now contains Testicles and Uterus. If you're tryin' to hold back your feelings and if you feel like I feel, then understand me, you've got to be here sugar! If you're in the mood for education about life's origins, then hold on to this exciting gift box collection and Let's Get It On!

All about Let's Get It On

Egg Cell
The egg cell, or ovum, is the largest and most important human cell in the world – and it’s only found in women! But a human egg is only the size of the period at the end of this sentence.

Like a princess in a fairytale, an egg cell has only about a single day to survive before finding a mate – but because sperm cells can survive for up to 5 days inside a woman’s body, a woman can be fertile for nearly a week.

Sperm Cell
The word sperm means “seed” in Greek, and the average man makes over 1,000 sperm per second! Of course, very few sperm will ever have their chance to fertilize a mother’s egg and pass along the father’s good looks and personality.

But, every now and again, one beats the astronomical odds. A baby is conceived and begins to grow – and with a father who’s one in a million million.

Zygote
After the egg is fertilized by a sperm cell, they combine to form the zygote. The zygote represents the first stage in the development of a genetically unique person. It has genes from two parents, thus it carries two sets of chromosomes. The zygote contains all the essential factors for development, existing as an encoded set of instructions in the genes.

The first few days of life are very busy. After the zygote divides many times it is implanted in the mother’s uterus. And after about nine months… Happy Birthday!

Testicles
The two testicles are the primary reproductive organs in men. Also known as testes or male gonads, the testicles have two main functions: production of sperm and testosterone. This hormone is responsible for the development of muscles, body hair, deeper voice and other male characteristics during puberty. Before birth it is involved in the growth of male sex organs. During adulthood testosterone helps you have a ball in life.

Uterus
Everyone starts life in a woman’s uterus where we develop during pregnancy. Each side of the uterus has an ovary with thousands of human eggs. Each month an egg travels down a fallopian tube to the uterus. When fertilized by a sperm, the egg implants itself in the uterus. The embryo grows into a fetus lying snugly in amniotic fluid and nourished through the placenta. After nine months, the baby turns head down and heads out into the world!