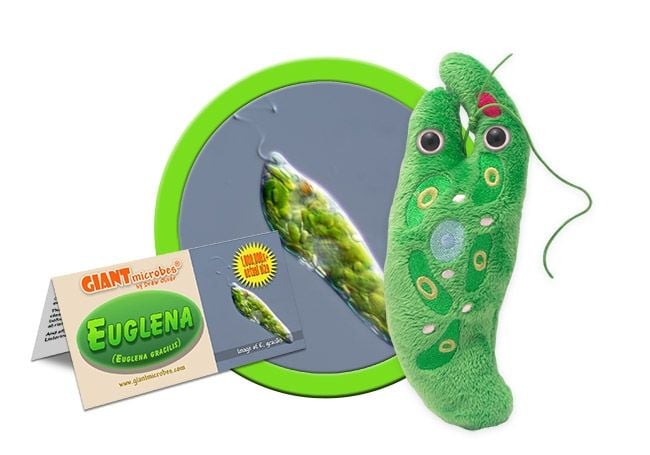 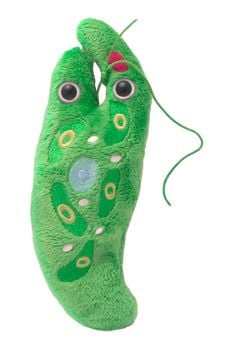 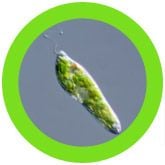 All about Euglena (Euglena gracilis)

FACTS: Euglenas are very common aquatic creatures found in fresh water, salt water – and laboratory droplets. They are one of the most studied microscopic organisms!

Euglenas possess the representative features typical of eukaryotic cells, such as a nucleus, mitochondria, golgi bodies, lysosomes, and vacuoles. But their most distinctive characteristics are a long flagellum and a large red eyespot. (Euglena means “good eye” in Greek, though the eyespot is actually an eye lid of sorts which obscures light from other photoreceptors as the cell rotates.)

Although Euglenas can squirm and crawl like other microorganisms, their long flagellum twists like a propeller allowing them to pull themselves forward at a much faster speed. And by navigating towards the light, Euglenas can increase their food production.

In fact, Euglenas play symbiotic host to green algae and other micro-organisms which produce food for the Euglena while benefiting from its ability to move toward light. Sometimes, they are so successful at eating and multiplying they can turn an entire pond green!

Early taxonomists were fascinated by Euglenas because not only can they produce their own nourishment via photosynthesis like plants, but they can also move about and feed like animals by absorbing nutrients from decaying organic matter into their bodies. In the end, it was decided that the Euglena was neither a Plant nor an Animal, but a Protist which is, well, neither a Plant nor an Animal – or both. You decide!