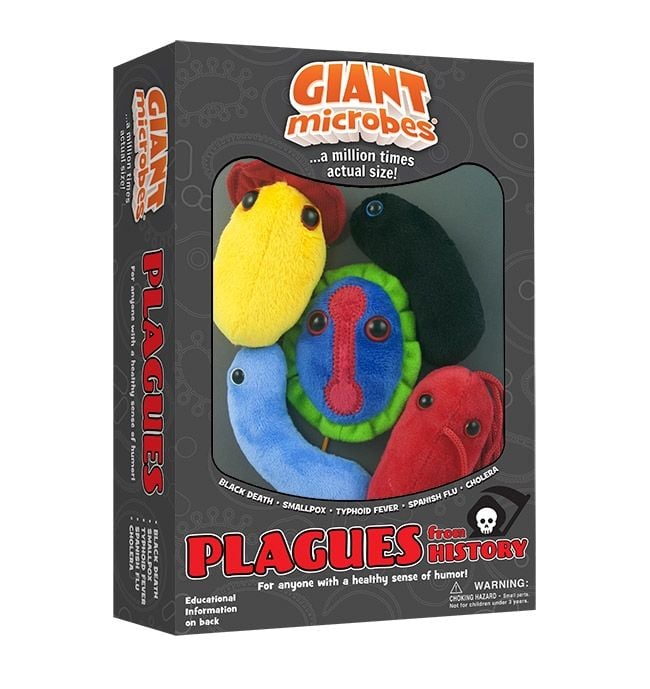 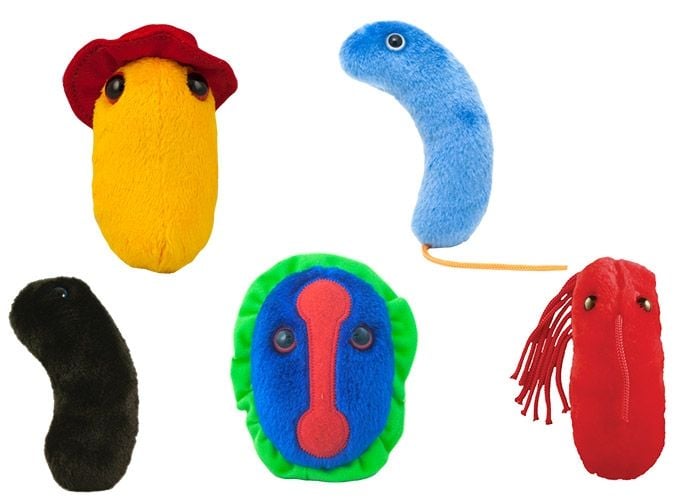 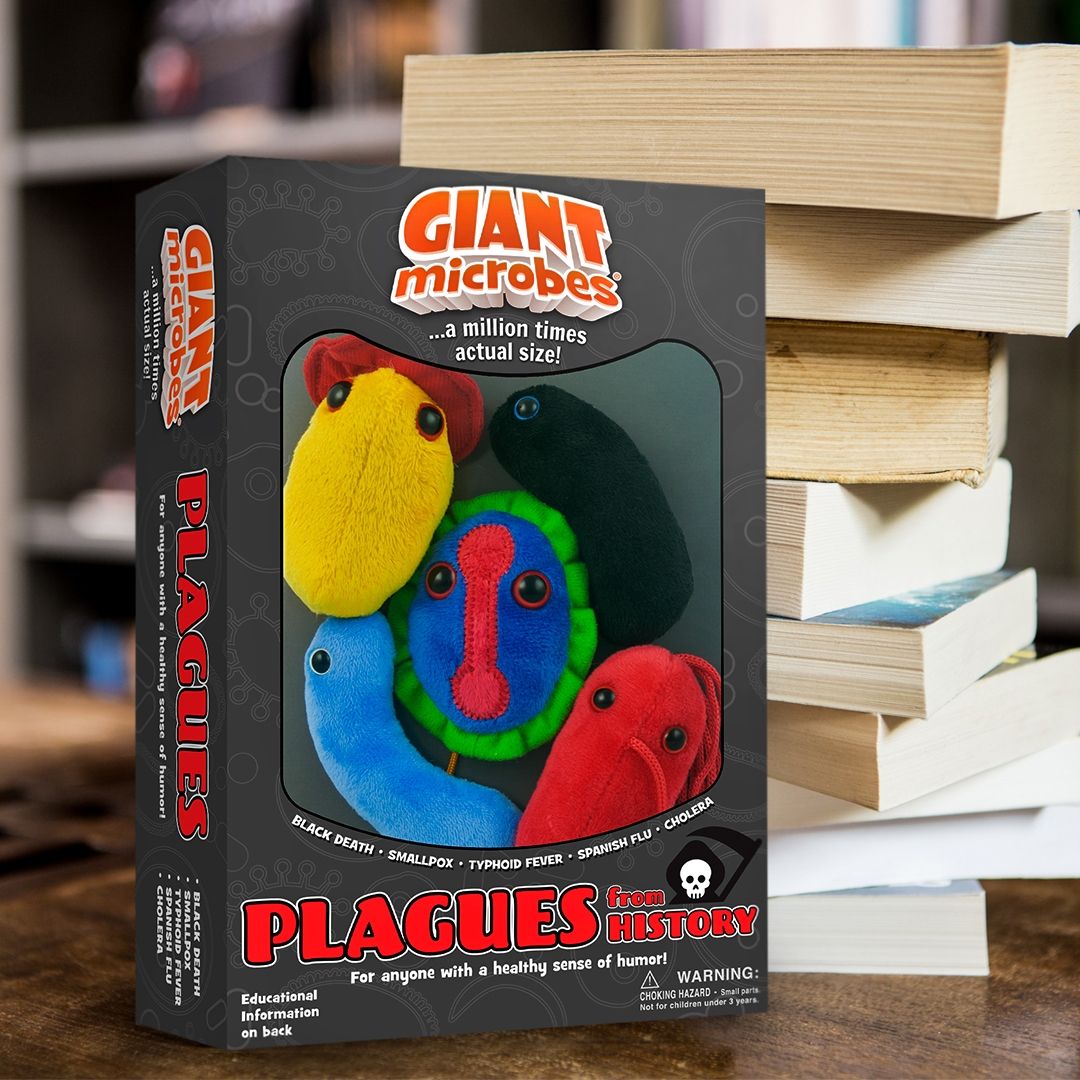 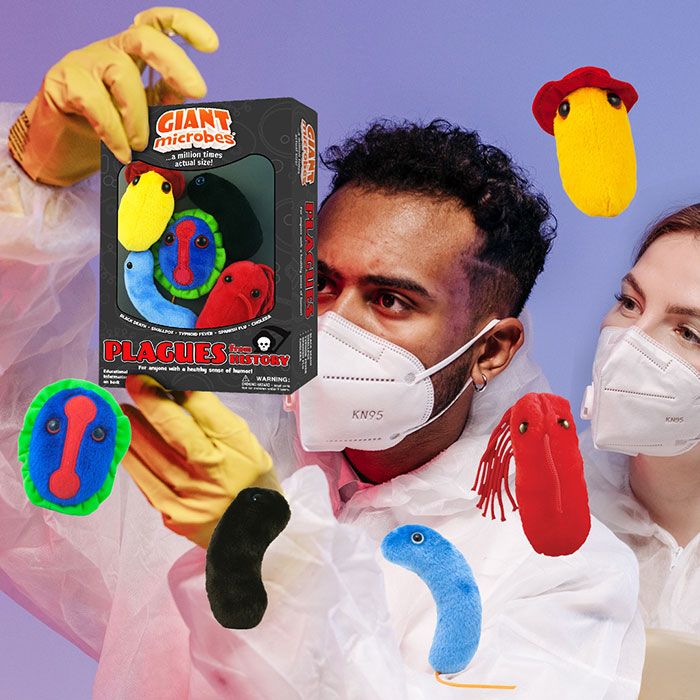 History is written not only by people, but also by microbes. From the reshaping of Europe by the Black Death to the devastation of the Americas by measles and smallpox, human civilization has been shaped by epidemics. These deadly bacteria and viruses will surely give us all some perspective and plagues to reflect upon.

Clip them onto your backpack, keys or anywhere! Includes key chain clips.

All about Plagues From History

Black Death
In 1347 the Black Death (then called the “pestilence”) arrived in the city of Messina in Sicily. By 1352, 25 million people, a third of Europe’s population, were dead.

The plague has not been eradicated, but outbreaks today are few and isolated. In addition, there are readily available treatments including the antibiotic Tetracycline. Nevertheless, antibiotic-resistant strains could one day become prevalent and history could repeat itself again...

Smallpox
Smallpox is a deadly disease cause by the variola virus. From ancient Egypt and Greece, to China and the Americas, it has killed countless millions for centuries.

Variola is one of the largest and most complicated viruses known. It invades a human cell and forces it to reproduce the virus until there are thousands of viruses inside the cell. The cell bursts and showers the virus onto other cells.

Typhoid Fever
After a week or two incubation period with Salmonella typhi, Typhoid Fever strikes causing hemorrhagic red spots on the chest and abdomen, ulceration of the intestines, and an extremely high fever that can last over a month. Untreated, the mortality rate is as high as 20%.

Fortunately, there are now vaccines that are up to 70% effective.

Spanish Flu
There were four influenza pandemics in the last century. The 1918 Spanish flu was the mother of all pandemics in two ways: it was the deadliest, and, remnants of that viral strain led to the other outbreaks. The Spanish flu likely began in Kansas. With WWI under way it quickly spread globally. Ten times as many Americans died of this flu than those who died in WWI combat. In a typical flu season up to 500,000 people will die. The 1918 pandemic sickened up to 40% of the world, killing an estimated 50 million!

Cholera
There was never a time when anyone loved cholera. And Gabriel García Márquez notwithstanding, the sufferings of romantic entanglements are only marginally comparable to those of V. cholerae infections.

When this water-borne bacteria pursues its victims, it produces a toxin that attacks the lining of the small intestine. The stomach-churning discomfort is vaguely reminiscent of the pangs of lovesickness, followed by unrelenting diarrhea and life-threatening low blood pressure.