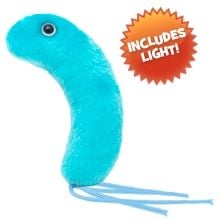 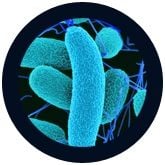 This incredible organism lives symbiotically inside the light organ of the adorable bobtail squid!

All about Vibrio Fischeri (Vibrio fischeri)

FACTS: Vibrio fischeri is a marine microbe known for its ability to emit light, or bioluminescence. This ability has enabled the microbe to make significant contributions to science. By studying its bioluminescent properties, scientists have discovered new methods to detect the presence of poisons and toxic contaminants in water. V. fischeri can be commonly found propelling freely in open water among other marine life.

Not to be mistaken for its pathological cousin, Vibrio cholera, V. fischeri is a team player. It is symbiotic partner of the bobtail squid, naturally inhabiting the squid’s light organ. As a nocturnal forager, the bobtail squid relies on V. fischeri’s ability to deploy a unique coordinated cellular reaction, called quorum sensing. The reaction produces a glowing light that masks the host’s shadow from its prey. In turn, the Bobtail Squid’s light organ provides a protected habitat and stable source of nutrients for the microbe.

Quorum sensing is a form of cell-to-cell communication that controls genetic expression in response to changes in cell population density. Quorum sensing bacteria like V. fischeri produce and release chemical signal molecules called autoinducers. When concentrations of autoinducers reach a threshold, a chemical chain reaction signals a coordinated cellular response. In the case of V. fischeri, that response is the emission of light.

V. fischeri is a proud Hawaii-native and has been a candidate for Hawaii’s official state microbe. Regardless of its official government standing, V. fischeri is committed to shedding more light on science!