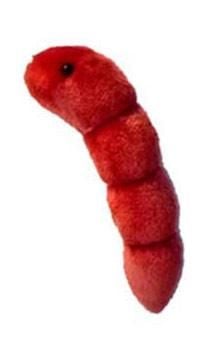 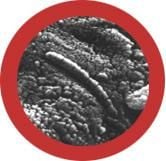 FACTS: There is little doubt that the rock ALH 84001 came from Mars – the gases trapped inside the rock are identical to those found in the Martian atmosphere by the Viking probes. However, the evidence for life inside the rock is widely debated!

In 1996, Dr. David McKay and his co-workers reported that they had found shapes inside the rock that look like fossilized bacteria. Skeptics wondered if terrestrial-bacteria had simply crawled into the rock at some point after it arrived. But examinations made of other meteorites collected nearby in Antarctica found no bacteria inside (though recent NASA studies have demonstrated this possibility).

Mineral grains and chemical compounds (such as carbon and magnetite) commonly produced by known bacteria were also found in the rock. While these materials can be produced by inorganic processes, the organization of the substances suggested the presence of life. Most intriguingly, a quarter of the magnetite is of a type which, so far, is known only to be produced by life.

The debate continues – and many scientists are skeptical. But, even if the evidence is less than rock solid, it is indeed possible that we have been invaded by Martians!