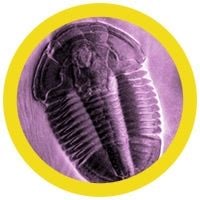 Hunting for a Cambrian creature to call your own? Then you’ll certainly want to collect this cuddly trilobite, five-eyed opabinia and their alluring 500 million year-old buddies.

All about Dino Creatures 4-pack

Trilobite
Trilobites were wonderful creatures that went extinct before dinosaurs ever lived! They were arthropods that evolved over 500 million years ago in the Earth's ancient seas. Trilobites were one of the most successful early animals on the planet, thriving for about 300 million years. Trilobites are the most diverse group of extinct animals preserved in the fossil record with over 20,000 described species. Today, trilobites are favorites among fossil hunters and collectors. Their beautiful and recognizable fossils are found in rocks all over the globe. So be on the lookout for trilobites in your backyard!

Marrella
Marrella was an amazing anthropod that lived over 500 million years ago! It shared features with modern day insects, spiders and crabs, but its true identify remains a mystery. It had two rearward spikes, jointed legs and was protected by a hard outer skeleton. Marrella hovered above the seafloor, using its brush-like antennae to search and dig for food. This amazing creature was prevalent in ancient seas. Over 25,000 specimen have been found in the Burgess Shale, a famous fossil deposit in British Columbia, Canada. Here you can dig fossils of trilobites, opabinia, wiwaxia and marrella. If you want an intriguing glimpse of early life on Earth, Burgess Shale is the place to go!

Opabinia
The remarkable flowering of animal life that began a half of a billion years ago is known as the Cambrian explosion. This was nearly 300 million years before the first dinosaurs. During the Cambrian period, complex forms of modern animals first emerged on the Earth. Among the weird and wonderful creatures was opabinia. It had paddle-like lobes for swimming, feathery gills and five eyes! Its long, clawed proboscis must have been useful for catching prey. With its sci-fi eyes and odd tubular mouth, opabinia has been assigned its own extinct phylum, unlike any living creature today!

Wiwaxia
The slug-like wiwaxia was as bizarre as any other Cambrian creature. Sallying forth in its chain mail of scales, wiwaxia beautifully represents the explosion of animal life that occurred when geological and biological events transformed the Earth. The evolution of animal bodies may have taken 50 million years during this period. The fantastic animals that arose during the Cambrian period reshaped more than 3 billion years of life on our planet. Exemplifying how creatures from so long ago relate to animals today, wiwaxia’s scales have a microscopic structure that relates them to modern worms and its evolutionary cousins the mollusks.